Summary: Summary: A randomized block design experiment was conducted with 72 crossbred (Duroc × Landrace × Yorkshire) pigs (36 males and 36 females), 24 pigs (12 of each sex) were assigned to each treatment, and treatment groups were assigned randomly to pens in 3 replications. 3 treatment groups all used corn and soybean meal diet which were same except the additive form of selenium. Group I added selenium that of the form of sodium selenite 0.3mg/kg. Group II added selenium that of the form of selenium methionine chelate 0.3mg/kg. Group III added selenium that of the form of selenium yeast chelate 0.3mg/kg. The results showed that Group II and group III had no significant difference in improving the daily gain, feed intake and feed than gain of piglets with Group I. And the content of immune globulin (IgG) and the activity of glutathione peroxidase (GSH-Px) of Group II and group III significant higher then Group I. The content of blood selenium of Group II and group III very significantly higher than Group I. There was no significant difference of the activity of blood superoxide dismutase (SOD) among the 3 groups.

Piglets, especially which after weaning two weeks, have special requirements on feed quality, including high nutrient concentration and digestive rate, good palatability of feed, and improving disease-resistant of piglets, etc. Adding chelating organic trace elements instead of inorganic trace elements in piglets’ feed has a special meaning from that perspective.

The purpose of this study is to compare the using effect of sodium selenite, selenium yeast and selenium methionine chelate through the way of investigating the reproductive performance of weaning piglets, immune globulin (IgG), activity of glutathione peroxidase (GSH-Px) and superoxide dismutase (SOD), content of blood selenium. And it provides the reference for the proper use of trace element selenium.

1.Materials and Methods
1.1 Time and place
The experiment was started in Wanda experimental basal piggery in Xiantao, Hubei on April 20th to May 26th, 2015.

1.2 Experimental animals and group
A randomized block design experiment was conducted with 72 crossbred (Duroc × Landrace × Yorkshire) pigs (36 males and 36 females), 24 pigs (12 of each sex) were assigned to each treatment, and treatment groups were assigned randomly to pens in 3 replications. Feeding 3 kinds of experiment diet respectively.

All kinds of test feed were pressed for granular material. 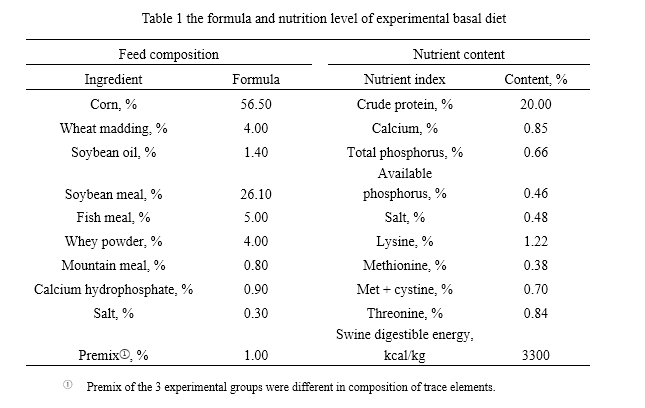 1.5 Raising management
The experimental period were total 35 days. Pilot test were 5 days. Formal test were 30 days. Experimental pigs were raised in the same nursery and web high bed of the same toward. They could be free to feed themselves and drink. Immune and raise procedures according to conventional piggery.

Preparing work finished in the day before the afternoon of piglets’ pilot test. Gave each group corresponding test feed the next morning. Fasting weighted, calculated feed and began to test in the morning of formal period.

1.6.2 Blood biochemical indicator
Randomly chose two piglets of each column when the experiment was over, and drew blood respectively in anterior vena cava. After standing for half an hour, sucked upper transparent serum and packed respectively in small glass bottles, then stored in refrigerators (-20℃) for use.
Use enzyme linked immunosorbent assay (ELISA)to determine serum IgG concentrations.
Use xanthine oxidase method to determine serum SOD enzymatic activity.
Use dithiol nitro benzoic acid method to determine GSH-Px activity.
Use hydride generation atomic fluorescence spectrometer (HG-AFS) to determine the content of selenium in blood.

1.7 Statistical analysis
After initial handling of experimental data by Excel, used software SPSS17.0 to do the variance analysis.

2.2 The influence on piglets’ each biochemical index about different selenium source.