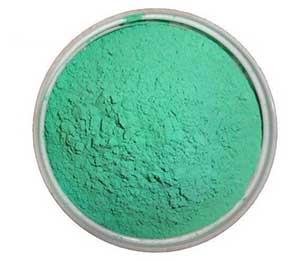 Tribasic Copper Chloride (TBCC) is a trace mineral used for copper source to feed diet with copper content highly up to 58%. This salt is insoluble in water but dissolve quickly and easily absorbed in the intestinal tract of animals. Compared with other copper sources, TBCC has a high utilization rate and can be quickly dissolved in the digestive tract. Due to the stability and low hygroscopicity, TBCC will not accelate the oxidation of vitamins and antibiotics in the diet. The biological effectiveness and biological safety of TBCC are higher than that of copper sulfate.

The amount of copper used with Tribasic Copper Chloride is 25% to 30% less than copper sulfate, which can completely replace copper sulfate. It not only reduces the cost of feed, but also greatly reduces the environmental pollution caused by copper excretion.

Tribasic Copper Choride is also an important ingredient for agricultural using, mainly as an agricultural fungicide for which purpose it is extensively employed in formulated form as dusts, wettable powders and pastes.

Important:
The above suggested dosages are based on general animal condition as far as we know and these are only for your reference. For the actual required dosage please get instruction from your nutrition advisor.